An Indigenous man from the Brazilian Amazon sings during a protest with Extinction Rebellion activists in front of Paris courthouse to highlight a lawsuit brought against French retailer Casino for alleged failure of due diligence and the selling of beef linked to deforestation, in Paris, France, June 9, 2022. REUTERS/Sarah Meyssonnier TPX IMAGES OF THE DAY

Representatives of Brazilian indigenous communities on Thursday (June 9) protested the alleged role of Casino in Amazon deforestation, in front of the tribunal tasked with arbitrating a dispute between the groups and the French supermarket chain.

A handful of indigenous people made the trip from Brazil and could be seen demonstrating in traditional attire, along with French environmental activists.

The hearing ended with a French judge proposing mediation in the legal dispute. Lawyers for Casino said the French retailer supported the mediation proposal, while an attorney for the indigenous groups said he would be advising his clients to back the proposal.

The Amazonian groups allege Casino failed to do adequate due diligence of its supply chain, resulting in the sale of beef linked to deforestation and human rights abuses in the Amazon.

It is the first time a French supermarket chain has been taken to court over deforestation and the loss of land and livelihood under a 2017 law in France called “Devoir de Vigilance.” The law holds companies accountable for human rights and environmental violations.

“What we are asking for is for the Casino group to trace all of its supply of beef in its supermarkets in Brazil and Colombia, in order to make sure that non of its direct or indirect suppliers are implicated in illegal deforestation and the invasion of indigenous territory,” Sebastien Mabile, a lawyer for the indigenous groups told Reuters.

Mabile said mediation would be faster than a trial.

Casino lawyers Sebastien Schapira and Thomas Rouhette told Reuters that the retailer “hopes this mediation can help overcome legal action which, along with a hostile communication campaign from the plaintiffs, is counter-productive.”

The lawyers added that Casino and its subsidiaries were “without contest among the sector’s most advanced companies in the fight against deforestation.”

Environmental activists and representatives of the indigenous groups from Brazil who protested outside the courthouse claim that their rights have been violated, land and territory stolen, and their forests and livelihoods destroyed.

“This is a form of corruption of whole families, which violates a series of collective rights.” 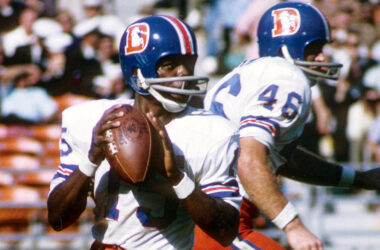 A sad day for NFL fans as Marlin Briscoe, the first starting black quarterback in the NFL, passed…
Read More