Ja’Leaha Thornton, a senior at Glades Central Community High School in Belle Glade, Florida has been accepted into 72 colleges. Thornton decided to turn the application process into a personal challenge saying, “instead of stressing myself out, I decided to make it a competition … and see how many I can actually get into. I wanted to broaden my horizons and explore some different schools outside of my state.”

According to The Week, “she used the Common App and Common Black College Application to apply to several schools, and said with fee waivers, it only cost about $20 for her to submit applications to 90 schools. She was accepted into 72 institutions, including her dream school, Howard University. As thrilled as she was to get into Howard, Thornton has decided to attend Xavier University of Louisiana, the only historically Black Catholic university in the United States. It’s “exciting” to have so many options, Thornton told GMA, and she is looking forward to studying pre-med psychology, with the goal of becoming a forensic psychologist.”

She hopes she can encourage other students to apply for any and all colleges that interest them and “go beyond what’s in front of you”, she said. 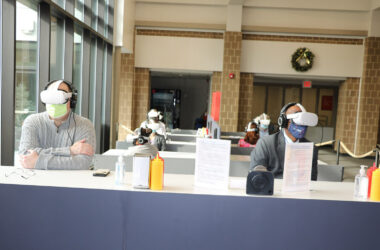 The “Traveling While Black” virtual reality exhibit has opened at McLean Community Center in Virginia. The virtual experience…
Read More